Home | About | Governance | Board of Directors 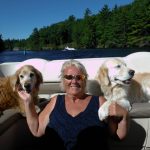 Since 1980, Viive has owned and managed four companies including Graffiti Magazine, an international award-winning music/lifestyle publication in the 80s. For twelve years, Viive has been on Canada’s Top 100 Women Entrepreneur’s list. As a founder of Tamm and Kit, she stewarded this Toronto-based advertising agency onto Canada’s coveted ‘Top 100 Employers’ list ~ the first advertising agency to ever receive this designation. Viive is also the operating partner of The Pickering Markets, Canada’s largest indoor flea market. Having served on several boards, Viive was the Chair of Operation Migration about which the movie ‘Fly Away Home’ was based. Serving as Board chair since 2008, Viive has spearheaded a number of initiatives that have helped GR grow both in size and notoriety. She led a team to revamp GR’s re-branding including the creation of the logo and website, redevelopment of the Guardian newsletter into a full-color 16 to 20 page quarterly publication, and overseeing ‘Golden Reflections’ ~ our anniversary coffee table book. Viive also instigated LCBO Tag Days, which is now one of GR’s biggest awareness builders and fundraisers. In the past, she helped organize the golf tournament and car rally. She helped create the Wishbone Lottery, which is currently our major fundraiser. Along with her fellow board members, she helped initiate the Istanbul Mission of Love which has brought hundreds of Goldens to Canada, creating major publicity and notoriety for GR. Her furkids Mr. Bibbs, Zoey #1526, Garci, and Oakley #2071 (all rescues) provide her with her inspiration. 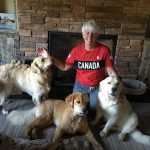 Jane came to Golden Rescue as a volunteer when she adopted Dylan #1124 in 2009. Dylan was a tripod who came to Golden Rescue from a very bad situation. His early hard life took a toll on him both physically and emotionally. He bit his first two foster families and was basically on his last strike when Jane adopted him. Jane would later say that he really rescued her. Over time and with much love and patience on both sides, Dylan became a Golden who could be trusted in any situation. Jane says he opened her eyes to how many wonderful dogs are just waiting for second chances with loving forever families. And that is what motivated her to get involved with Golden Rescue and advocate for canine rescue everywhere. Jane is a proud volunteer who served as the Chair of the Golden Rescue picnic for four years and has served on the board since 2012. She is currently the Vice Chair. She shares her home and her heart with four amazing Goldens ~ Abby, Bear #1679, Beecher, and Daisy #2226. 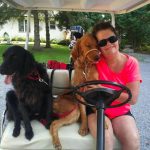 Patti’s passion for Golden Retrievers began a long time ago and has continued to grow as she has been the proud fur parent to six Goldens over the years. She has been a great supporter of Golden Rescue; her volunteering began on the hotline, helping wherever she could, she also gave her time to organizing actively the  registration desk for our annual picnic. Eventually Patti joined the intake team and is currently Director of Golden Care, managing vet care, intakes, transportation and our Microchip base. Patti does evaluations, home visits, and transports. Patti is very active on the Facebook, Kijiji, shelter, and personal ads online response team. Outside of GR, Patti and her husband stay busy running Matheis Financial Group where she is the Vice-Present of Human Resources.    Their dog and cat friendly company which has been in business for 35 years. They both love to travel and spend time at their beloved cottage in the Kawartha Lakes with their Goldens Lucy #2757, and Atlas #2326 who came all the way from Istanbul. 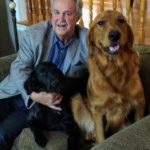 Harry’s love for Goldens began on a snowy day in December 1989 when the family brought our first Golden, Mandy home. That day sealed the deal for his love of the breed and inevitably his choice to become a member of the Golden Rescue team. Over the years the Matheis family has loved and cared for 6 golden retrievers and a few cats too. Alongside his wife Patti, they execute behaviour evaluations, home visits, and transports and are picnic sponsors. Harry’s financial business experience provides added support to the Goldens – it’s all about the Goldens- when their owners, adopters or lovers of the breed have questions or need help with Charitable donations or planned giving advisory.

Outside of GR, Harry and Patti stay busy running their dog and cat friendly company Matheis Financial Group, which has been in business for over three decades. They both love to travel and spend time at Ché Evergreen cottage in the Kawartha Lakes with their Goldens; red head Lucy #2757, and world traveler Atlas #2326 who came all the way from Istanbul. 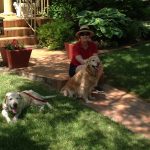 Sharon was elected Treasurer in the fall of 2010. She retired from the Windsor-Essex County Health Unit as the Director of Corporate Services. She is a member of the Chartered Professional Accountants of Ontario and has a B. A. and a Hons B. Comm from the University of Windsor. Sharon and her husband Gary became aware of Golden Rescue in 2009 when they adopted Max #1249 as a companion for Nellie when their other Golden, Morgan was diagnosed with cancer. They currently share their home with Reggie #2349 and Missy # 3105 who were rescued from a shelter in Turkey. Sharon thinks that volunteering with GR continues to be very rewarding and the perfect rescue matches are the icing on the cake. 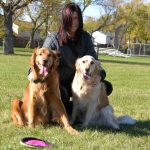 Kelly’s work with Golden Rescue is in honour of her special pair, George #682 and Murphy #683. A life-long animal lover, Kelly dedicates much of her time to helping raise awareness about animal rights and advocacy. Kelly is the CEO at Media Street Productions in Windsor, Ontario, and in her 20+ years, has produced many award-winning television commercials and videos, both in the corporate and non-profit sectors. She is actively involved in her community, contributing much of her time and skill set to various non-profit and local organizations, as a board member, committee member and volunteer. Kelly has been a volunteer with Golden Rescue since 2005. She is the Team Lead for both the Social Media and Website Teams, helps with events, fundraising, home visits and transport. Her background in communications and her love of Goldens makes her a natural fit in her role on the Board. She is passionate about rescue and dedicated to helping Golden Rescue continue to build its brand and expand its reach throughout Canada and internationally. She believes that every Golden deserves a second chance and she is willing to do whatever it takes to help make that happen. 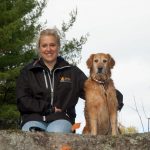 Cynthia first became aware of Golden Rescue in 2007 when she found us on the internet and became an adoptee, welcoming Fred #801 and Ginger #802 into her life. Cynthia resides in Toronto and has worked for one of the largest privately-owned lumber companies in Ontario for almost 20 years. Cynthia was educated in Civil Engineering at Seneca Collage. She began volunteering her time with GR eleven years ago becoming involved in many aspects of the organization including fundraising, most notably the golf tournament. Currently, Cynthia is the team lead of the Wishbone Lottery, GR’s major fundraising initiative. She also monitors and responds to our website emails, fosters, and volunteers at events and with inventory. She has recently added a new member to her family, sweet Lily #2253. 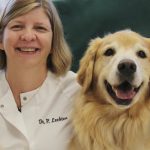 Patty, a staunch Golden Rescue supporter, graduated from the University of Missouri College of Veterinary Medicine. After three years of practicing veterinary medicine in Las Vegas, Patty moved to Ontario. In 1989 she joined Allandale Veterinary Clinic as the only small animal veterinarian. Today, Patty is the sole owner of Allandale Veterinary Hospital, a brand new, five-veterinarian, state-of-the-art veterinary hospital in Barrie. Patty serves on a number of boards, both veterinary and non-veterinary, loves Goldens, and has always been impressed with the dedication and care provide by Golden Rescue. 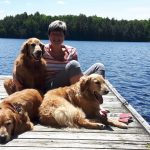 Monica and her husband Chris have been active GR volunteers since 2003, when they adopted their beloved Toby #422. They initially volunteered for the massive job of transferring GR’s files from paper to digital; however, they have put their hands up to help in so many other ways over the years including home visits, behavior evaluations, and their considerable work on adoption follow-up calls. More recently they have been involved in the International Mission of Love, assisting with social media and transport. Since Toby, they have adopted five Goldens and now share their lives with Dreamer #2579, Oban #2125 and tripawd Georgie #2267 (George Burns from Istanbul), all affectionately known as the DOG Crew. Monica has joined the Board as Events Director to continue GR’s mission of attending events to help raise much needed funds, create awareness about the organization and to educate the public about responsible pet ownership. 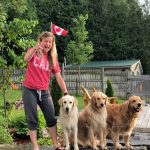 Julie HendrenDirector of Education and Advocacy, Secretary and Picnic Chair

Julie fell in love with dogs after her husband brought home their first Golden Retriever in their first year of marriage. She has wanted to help all animals since that day.  She’s travelled the world to volunteer with elephants, lions, chimpanzees, turtles, coral species and of course her favourite… the dog species.  She was lucky to find Golden Rescue online to connect with them and learn what “rescue” is all about.  Julie resides on Pigeon Lake in the City of Kawartha Lakes with her husband and their three Goldens and teaches at I.E. Weldon Secondary School in Lindsay, Ontario.  Julie understands that she needs to be a positive role model for students who can learn to care and become active citizens by watching and listening to adults who are in close proximity to them.  Julie also volunteers with East Central Therapy Dogs visiting weekly at the Peterborough Regional Health Centre.  She runs the Model United Nations at her school and works with the Environmental Advisory Work Group for the Ontario Secondary School Teachers’ Federation.  Currently, Julie runs the annual Golden Rescue Picnic, assists with the Golden Rescue LCBO coin box collection and with the Wishbone Lottery along with volunteering at numerous events throughout the year.  She appreciates everything that Golden Rescue has taught her and hopes that she can help this organization rescue more domestic and international Goldens wherever the need exists.

Laurie’s love of dogs began as a young girl when her grandparents took in a neglected black lab named Cinders. With each dog she’s had in her life since, her adoration has just grown stronger. Laurie moved back from Vancouver to Calabogie, Ontario to be near family in 2020 and joined forces with Golden Rescue to honour her departed retired service dog Cyber. Laurie is leading the Golden Rescue Fundraising Committee and is over the moon about her newly adopted 3-year-old girl named Abbey from Cairo. Laurie’s a versatile, accomplished Human Resources Leader with over 25 years of experience in the private, public and not-for-profit sectors, for Fortune 500 companies (Samsung, Cardinal Health, Akzo Nobel). She is an enthusiastic business partner with a caring, collaborative management style and a proven track record of helping companies and people realize their full potential.  She’s had her own consulting business since 2014, helping clients large and small, align their talent strategy with their business strategy and training their managers on HR best practices.

Ben’s love for Goldens stems from a deep connection – his love of food, short attention span, and staring longingly at squirrels through the window. Luckily, he hasn’t figured out how to open doors or he’d never come back. He has been involved with Golden Rescue since falling in love with Maggie #1622, the adorable, epileptic weirdo, and has since adopted two more. He is the general manager of Viamede Resort, which hosts the annual Golden Rescue picnic.  During his copious time off, he goes fishing, hiking, foraging, and hangs out on the dock with Toby #2000.