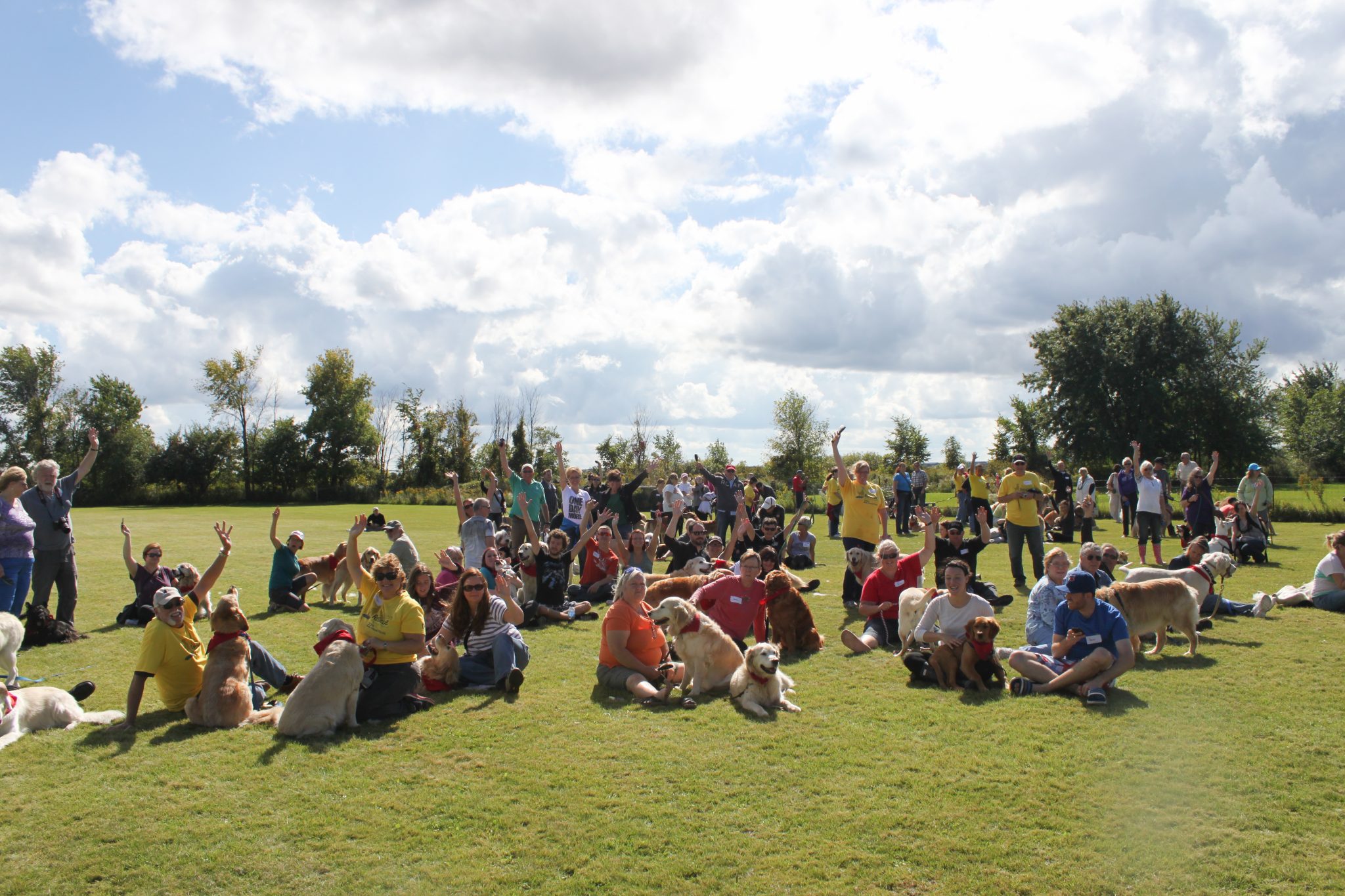 We did it!
According to Guinness World Records, we are…
Officially Amazing

The Story of Golden Rescue’s Picnic 2014

As the volunteers gathered at Maplelane around 8 a.m. to set up for this year’s picnic, the rain was relentless. The volunteers traipsed through the mud, soaked to the skin, trying to keep their spirits high…but it was difficult. A year’s worth of planning, the hope of setting two Guinness World Records, and having the best picnic turn-out ever, slowly started disappearing before their eyes. Undaunted, everyone continued with their setup responsibilities, not letting their hopes fade.

Then, as if by a miracle, at 10 a.m., the official kick-off time, the rain stopped. By 11 a.m., the sun came out and the day was gorgeous and mostly sunny. Someone in the crowd was heard whispering, “Okay, who paid the devil?”

The official ceremonies were kicked off by emcee Jillian Stewart, and introductions and thanks from GR Chair Viive Tamm and Picnic Chair Jane Ridell were given and the picnic was officially underway on the loveliest of days.

The photo contest winners were announced and we have discovered many talented photographers in our midst.

It was hard to tell how many people and dogs were there but initially it certainly didn’t look like there was the 340 dogs required to break one of the Guinness World Records. In fact, we weren’t sure we were going to break the 200 record for the most dogs wearing bandanas.

All who were there were having a great time in the leash-free area, dock diving, agility, general store, silent auction or talking to Dr. Patty Lechten at ‘Ask the Vet’. You could tell the joint was jumping…but was it jumping enough?

Lunch was served, graciously hosted by Viamede Resort, and it was delicious and well organized.

Still the question remained unanswered.
Did we have enough dogs to break both Guinness World Records?

It didn’t feel like it but it didn’t matter as everyone was having a good time. Many of the organizers kept looking at the entrance gate in anticipation and it seemed like people and dogs kept coming in even after 2 p.m. Might they make it after all? There was tension in the air.

After the very touching Rainbow Bridge memorial service with a single gold balloon flying into the sky, things started to get in gear for the Guinness World Records. Every dog needed to leave the leash free area as this is where the event would take place. The GR truck was in the middle of the field. A cherry picker with videographer atop was poised and ready to record the event. Notary Heather McKnight, in her court room robes, was standing beside the gate to ensure the count was done properly. Our dog groomer, Candice Lemmon, climbed the ladder which was leaned against the truck, carrying her amazingly groomed Standard Poodle around her neck and shoulders ~ it was quite a sight to see. Field stewards, counters, and timers were at the gate ready as the owners and their dogs entered one-by-one.

The grooming lesson lasted a half hour and was very informative.

The day was concluded with the very popular doggie games and best dressed contest and 364 dogs with their 700+ family members left Maplelane happy and exhausted! Wow, what a day!