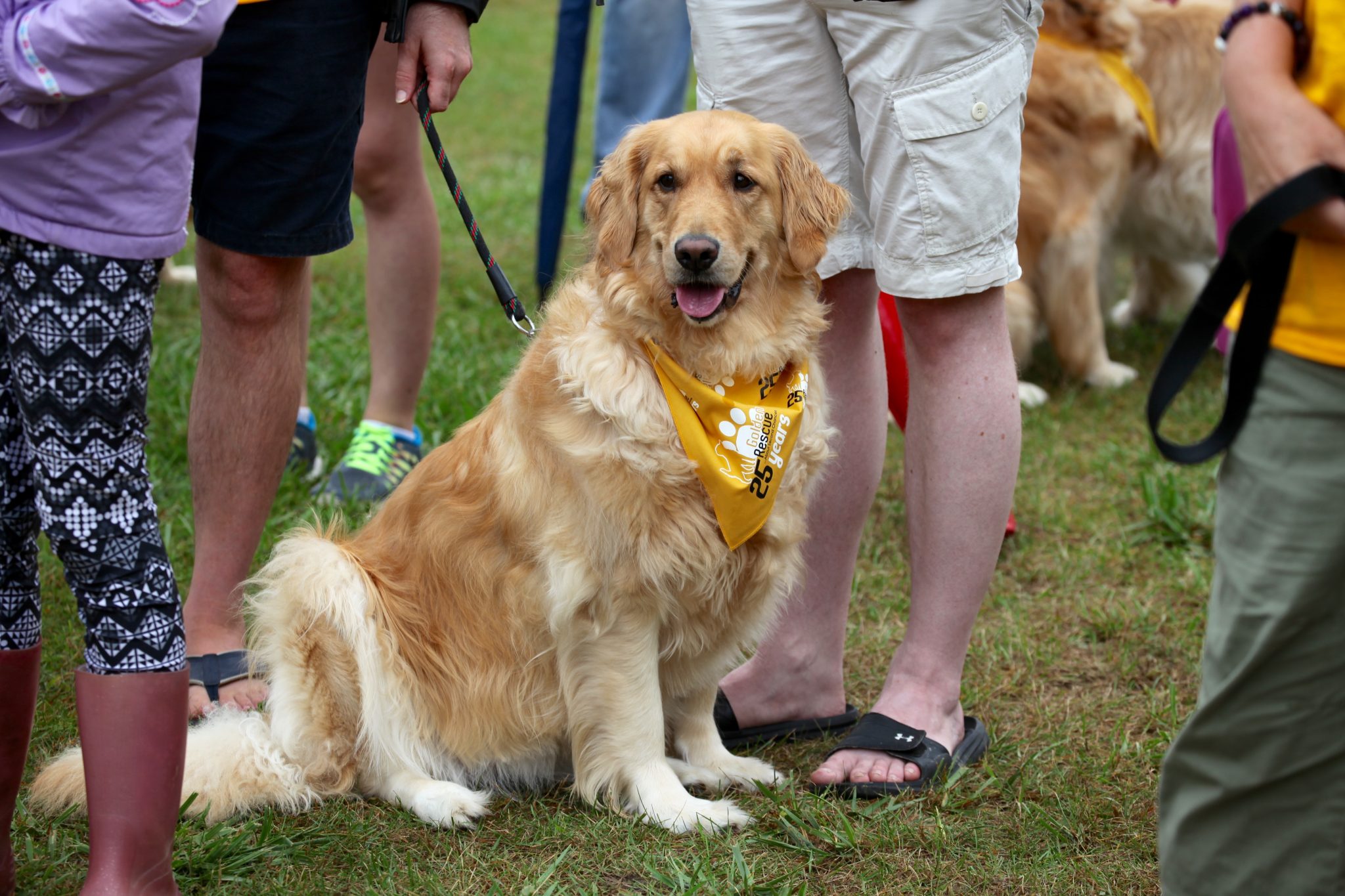 2015 was our 25th anniversary picnic and our 23rd annual picnic. An exciting new location, at Viamede Resort in the Kawarthas, was chosen as the venue and apart from a few growing pains that come with anything new, the picnic was a huge success.

On Thursday, the first volunteers arrived, with the Golden Rescue truck and 1,000  of our 25th Anniversary ‘Golden Reflections’ coffee table books. On Friday, set-up began in earnest with the mass-moving of these very heavy books, setting up of tents, and arranging the silent auction. By dinner time, we were almost ready.

Many people stayed the weekend and others stayed in the area. The Friday night Golden wedding in the Viamede chapel was a hoot. It was a rambunctious ceremony with just as many Goldens in the chapel as people. Laya #2145 said “I do” to Oakley #2071 and a reception BBQ ensued with a beautiful evening on Stoney Lake.

Saturday morning was rainy ~ apparently a tradition; however, most of the day stayed dry and the sun actually came out at times. Emcee Krista Maling kicked off the day introducing our Golden ambassadors and thanking the many, many sponsors and people who made the day possible.

The opening ceremonies were followed by the ‘Rick Lick’. Now you had to be there to see this! It is pretty hard to describe this whacky event in words but we’ll try. Ten brave souls lay on the ground and smeared themselves with peanut butter while 200 plus leashed Goldens looked on in delighted disbelief. A handful of chosen Goldens were unleashed to clean the peanut butter off these brave volunteers. It was hilarious! The clear winner was the crowd of on-lookers.

Then came the photo contest, popular as ever, followed by a casual bbq lunch put on by Viamede’s team.

The Rainbow Bridge Memorial was as touching as ever, with tears flowing in remembrance of those we miss.

This was followed by the always popular canine games, as crazy as ever. And the beach area was jam-packed with Goldens who love to swim or paddle around.

As 4 p.m. approached, so did the clouds. Participants left quickly and thanks to a quick-working bunch of volunteers, the books, tables, and tents were put away before the deluge.

See highlights of the picnic in this video!