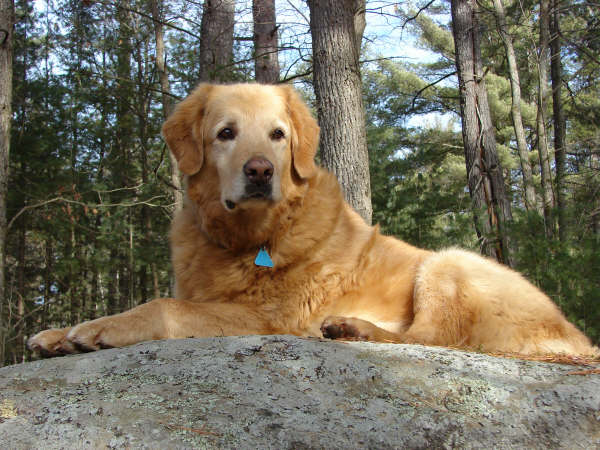 I adopted Hawkeye in September 1994 when he was 7 months old and for 3-1/2 years he was my loyal “buddy”. In February 1998 on a visit to Muskoka, Hawkeye left me! He took one look at my date’s waterfront home and the surrounding seventeen acres and he pledged a new allegiance. I’ve got to give to Hawk, he knew we were “in love” before I did, so what choice did I have but to marry the guy. The Severn River has been Hawk’s heaven ever since.

Hawk was diagnosed with epilepsy at age 3 and gave us quite a scare at 8 years old when after a grand mal seizure he slipped into status epilepticus. But Hawk is an amazing trooper and we are grateful that good veterinary care and lots of Valium kept him with us. His hind quarters were never the same after the prolonged seizures but he has soldiered on through arthritis and an ACL tear (at 12) to still be mostly mobile at 15 years old.

Hawk’s pesky doggie housemates, Becky (8), Bella (6) and Gertie (3) have kept him young at heart! and on his good days he’s still willing to run & thieve their tennis balls during our play sessions.

Every day now with him is golden!!