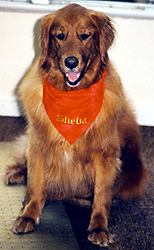 The photo with the red scarf was when Sheba first came to me in 2002 and the other was taken March 2/08 doing what she loves to do, lay on the snow. Sheba has come along way in 6 years. She was over weight and had a strong dislike of other dogs. Now her weight is in the acceptable zone of 60 – 65 pounds. As far as other dogs go, she still prefers to be the only one around but I have taught her to be a lot calmer when other dogs approach. Strangest thing though, she gets along great with our neighbour’s Chihuahua but no other dog.