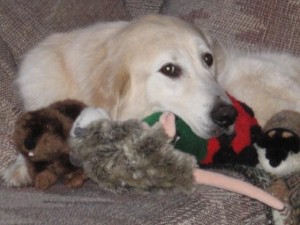 We adopted Toby in 2003, when he was abandoned at about a year old, and taken into the Rescue program.  We soon discovered that he had been abused, and since coming to his forever home, he has learned to trust and love his new family, including his adopted brother, Phantom the cat.  He has more stuffed toys than Toys r Us, and his favorites are the ones that squeak the loudest!  He loves to play “Catch me if you can” with us in the backyard, but his favorite spot, besides the couch, is the top of the stairs on the deck, where he will sit for hours, surveying his land!  We cannot thank Golden Rescue enough, for the priviledge of adopting our beautiful boy.