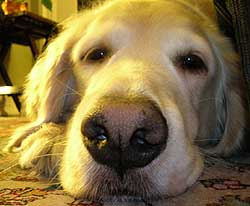 Finnegan is also known as “the good dog”, he is the master of our house. Among his favourite things are his stuffed toys “elf”, and “donkey”. He loves Raisin Bran, and playing tug of war. Since we brought Finnegan home in 2004, he has managed to lose all the excess weight that was getting in the way of his playing in at the park. Now he is a happy and loving dog, who can’t wait to bring you a present when you come into the house.