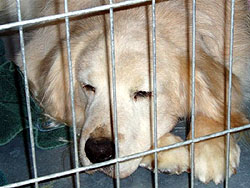 This is an update on the story of the amazing gentle soul named Webster. He has been in his forever home now for three years. He was the oldest of the Magnificent Seven that were rescued from a Golden Retriever breeding operation around the Ottawa area. Upon a thorough veterinarian examination, he was said to be a minimum of twelve years old, which makes him fifteen years old now. Suffering from a collapsed trachea, broken teeth, ectropic eyes, a broken spirit and thought to be deaf, he would crumble into a ball on the floor if touched. He did not eat and did not know how to eat from a bowl. He could not be crated or fenced in and he did not want his mom to leave him at all. He suffered from epilepsy and anxiety for which he is now on medication. Three years later, Webster has it all and is all, according to all who live with him. He adores his feline friends. He cleans them, sleeps with them and eats with them.Sometimes he even steals their food while they are eating. He continues to learn and to love life and his family. We know now that he is not deaf. He had just turned the world off.and tuned himself out of the horrible existence he knew. He now stands proudly in the tub for his bath, not curled up in a tight ball of fear and he loves to be brushed. Magnificent Webster has found his Forever Home.