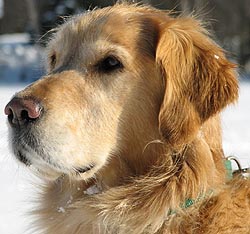 Kelti was surrendered by his 3rd owner due to an illness in the family and because he was being left alone for long periods of a time. Now in his 4th and forever home he is no longer alone, sharing his life with two other Goldens. Affectionately known as Kelti-Bum, he enjoys long walks, fetching water toys, snuggles and playing tug of war with his Golden sister Echo. You can always be guaranteed to be greeted at the door by Kelti in true Golden fashion……with a shoe or a stuffy in his mouth.