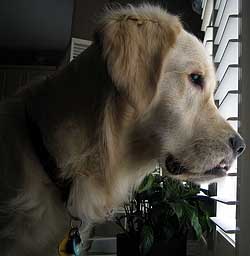 Cody is doing fantastic. He’s undergone several eye surgeries since we’ve adopted him but is otherwise doing well. Although his eyesight is somewhat diminished, he sure makes up for it with his sense of smell. Cody enjoys playing at the cottage with his Golden brother Milo and especially enjoys hanging over the dock and staring at his reflection. We’re sure he thinks it’s another dog and wonder how he’ll manage through winter when his friend seemingly disappears for several months. Cody also has three cats at home that he dotes over. He is a wonderful dog and we are so happy he’s joined our clan. Once again, thanks for everything and keep up the good work