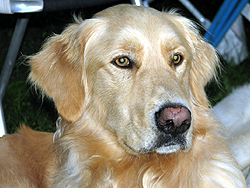 Buddy was picked up at an animal shelter early in 2006. He had been terribly neglected, covered in matts and burrs, and didn’t know how to play. He suffers from incontinence and has to wear a diaper while in the house. His foster parents couldn’t resist this charmer with beautiful golden eyes, so they have adopted him.