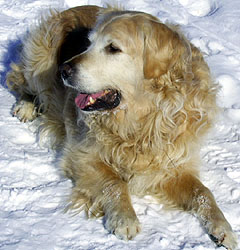 Cooper was welcomed into our home at the end of August 2006. His thyroid levels were too low, he weighed 71 pounds, and his long-term ear infections and polyps were threatening his hearing. After a visit to the University of Guelph at the end of September, his meds were changed, his food was changed to an allergy diet, and his thyroid was changed to 8 mg. Cooper now weighs 120 pounds, the polyps in his ear canals have disappeared, although a minor ear infection still exists, and the thyroid is now 9 mg. Cooper continues to thrive in our home. He greets us at the door and tells us all about the household activities. He brings us toys and ‘talks’ to us constantly. He enjoys his evening walks and the many scents of the neighbourhood. The female felines ignore him but step gingerly around his sleeping form. He likes to sleep in our bathroom at night (probably from his long-time crate occupation). He is very well trained and enjoys company. Cooper is a delight and a loving addition to our home.