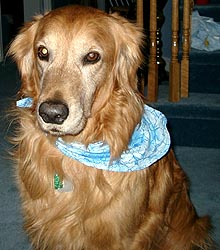 We’ve had Shane #705 over six months now and are delighted with him. He’s such a character! Half the time I call him Goofy. Shane settled in nicely and became a member of the family quickly. He’s such a loving critter, but needy too. He’ll suck up for affection any time he can and to anyone who’ll offer. We’re so very happy to have Shane. He seems to be happy here and loves his runs, car trips, and play. He has put on a few pounds but the vet says he’s not overweight and maybe we’ll run that off him now that the weather is a bit more conducive to exercise. He has filled the big hole left by our other Golden’s death last spring. We’re thoroughly enjoying this dog and thank you for giving him to us.