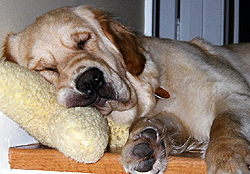 Rescue #731 came to us in early December, as a one-year-old, having endured horrific living conditions.This shy, timid, undernourished little girl has just flourished. She now lives with another Golden (eight-year -old Emmy) and has decided that she will make up for lost time and is the effervescent puppy she should have been. She has adopted this toy as her ‘baby’ and carries it everywhere, and is often found snoozing with it as a pillow. She and Emmy spend their days never far apart, running around the yard, in the house or engaging in a game of tug of war.