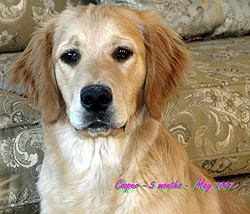 The lounging days ended with the arrival of this little fireplug. Cooper #777 has added a whole new dimension to the word mischief. His vocal personality keeps everyone entertained, including himself, throughout each day. He added sparkle to our 4-year old Liam’s day as well and the two boys frolic inside from one end of the house to the other and then carry it outside. Thanks Golden Rescue… we really appreciate having the little guy join the crew.