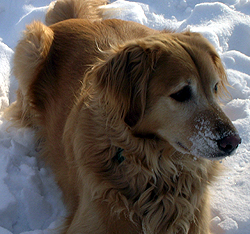 Mister Briggs (Briggsie as he is affectionately known), a five-year-old male, has joined us and Sophie (our nine-year-old Golden). We had lost our male Golden in July and were looking for a companion for Sophie who was missing him so much. Briggsie is a delight. He is gentle, calm ,and sooo obedient. Even though he only joined us recently, he has settled in quite comfortably (sleeps in our bed!!). Sophie just loves to run and play with Briggsie outdoors. He can also be quite funny when he comes and ‘talks’ to us asking for his dinner. He is so loving and there is no doubt that this is his Forever Home.