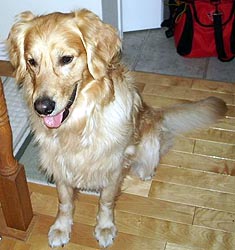 We were fortunate enough to have Baron join our family in the beginning of January 2008. He is a late Christmas present for us. Baron was found out in the cold, snowy, winter weather and it is very obvious that he was well taken care of by Golden Rescue volunteers. His sores are healed and he is a happy boy with a loving nature who is overjoyed to go out for walks in the country and car rides. We are all enjoying his silliness and his comical way of talking to us when a toy goes under something and he can’t get it, and you better pay attention or he will keep on talking. Waggs, the Bichon/cross and Bailey, the Jack Russell aren’t curling up with him yet but they are at least letting him play with their toys. They all have been on the sofa at the same time but I think it was from a full gallop down the hall chasing a ball!!! Alphie, the cat, thinks his throne is in jeopardy but he will come around soon enough if Baron has anything to do about it. Thank you for livening up our household with such a loving and winning personality.