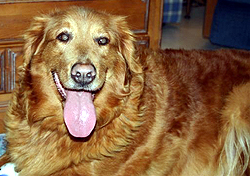 There was an emptiness in our home after we lost our 11 ½-year-old Golden in July 2007. A wise friend told me that I would know when the time was right to start a new project and so I did around Christmas, searching the internet and ending in tears as I read the stories of the many animals looking for homes after being given up by their owners or abandoned for whatever reason.

When I found the Canadian Golden Retriever Adoption Service website, I decided to apply and this set the wheels in motion for our finding Daisy. I requested a female Golden, about 60 – 65 pounds and one to three years old. I was told I could have a long wait, but about a week later, I was asked to “foster-to-adopt” a sweet girl about three years old and a little overweight. My husband and I agreed to do it and Daisy was picked up from a shelter and delivered to us a few days later.

I was stunned when I first saw her. She was so overweight she looked like a little bear. Two days later she weighed in at the vet’s at 101 pounds! With lots of exercise, a restricted amount of diet food, and much encouragement from friends, neighbours, and Golden Rescue, Daisy lost 13 pounds in five weeks.

Daisy has gained confidence as she no longer follows us constantly and she has learned to play. She is beautiful, responsive, loves attention from everyone, and enjoys her walks and fetching ball. She also wishes she could have more food. (Not until you lose another 20 pounds, Daisy.)

We love her and if her licks are kisses, she loves us too, so we adopted her on February 22.

Thank you, Golden Rescue. We are a successful match.