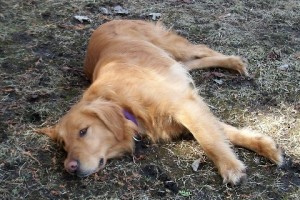 Pepper has enriched our lives in so many ways It would be hard to list them all. It all started last Spring when we lost our Golden Retriever of 7 years. Our family was devestated along with our Bernese Mountain dog Gracie who had just lost her best friend.Gracie went into a deep depression after losing her friend and we didn’t know what to do to help her.We contacted Golden Rescue and inquired about adopting a Golden that needed a forever home. Ina few short months we were told that they may have found a match for our family.We were so excited and went to meet Pepper immediatly .The minute we saw her we knew she was a perfect fit.She had a spirit that I haven’t seen before in a dog.She smiled and was full of energy.You could tell she just wanted to be loved.Her eyes told their own story they were full of such love that she had to give and she just wanted the same in return.She had been through so much in her short little life but that didn’t phase Pepper,she was a happy girl and wanted a forever home.She had a smile that warmed your heart and a personality to go with it. After meeting Pepper we knew she was going to join our family.We introduced her to Gracie and they became fast friends.When we brought Pepper home she settled in within the first 15 mins of being here.She bounced around the backyard with Gracie like she had always been part of our family.She chased the squirrels and birds and ran for hours.Gracie welcomed her with open paws and quickly became her old self.She needed Pepper and Pepper needed her.They are the best of friends and I couldn’t imagine ever seperating them.

Pepper has come so far in such a short time.She has the strength and perseverance I have never seen in an animal before.We love her dearly and thank Golden Rescue for helping Pepper get a second chance.