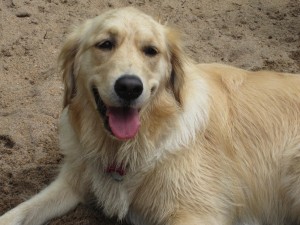 We had a house and we just got married – what next? A dog of course! We knew right off that we wanted a Golden Retriever and there was no question that we wanted to rescue one. Holly became a cherished member of our family in February 2010 after being found at a landfill site. She settled in with very little difficulty and quickly became friends with our doggie friends Stanley and Cleetus. She loves walking; playing tug of war and was easily housetrained. We love taking her for hikes; to the dog park and on our annual cottage trip where she is the only retriever who doesn’t like to go for a swim. We also have another little addition to our family, our son Sam, who has fallen in love with Holly and Holly loves him right back. The gentle tug of war with a sock has started and both of our babies enjoy it and Holly is so gentle and loves Sam hugs. Sam loves going for a ride in is stroller and taking Holly for a walk. We can’t wait for them to become each other’s sidekicks once Sam is walking on his own. Thank you Golden Rescue!