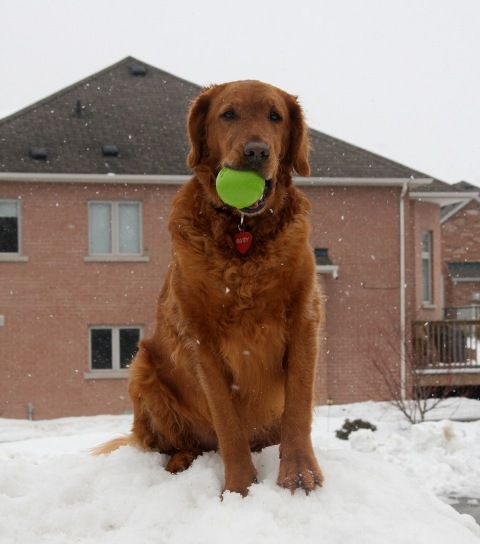 I clearly remember the telephone call from a Golden Rescue volunteer. It was a call to ask if we would be willing to foster a Golden who had been rescued recently and needed a loving, supportive home with a great deal of structure and patience. We had no idea until we met Ruby #1333 how much love, structure, and support she would need, but we were optimistic that we could help.

Ruby came to us traumatized. She had been surviving while living in deplorable conditions with other Goldens who also were just surviving. We knew only a few pertinent details. We didn’t know a lot about her background; however, it was clearly evident that she was terrified of everything, including us.

When we arrived home with her, she ran to the kitchen where there was an open crate. There she crouched into the back of the crate, shaking and terrified of what was going to happen next. Never having been trained to associate outside with toileting, she would indiscriminately select places to relieve her bowels and her bladder. We neither praised nor scolded. For those first four days were just for her to adjust to the rhythm of our home and to see through our actions and our presence that she was safe and accepted.

It wasn’t until her first Friday afternoon that I tried to coax her outside. It was a beautiful day. Always leaving her crate door open, I was hoping that her curiosity and initial bonds of trust would convince her that she could follow me and remain safe. After several attempts to coax her outside, I went outside by myself. As I looked at the forest surrounding our house and reflected upon my budding success as a gardener, I wondered if my husband and I had taken on too much with this dog’s issues, and perhaps, just perhaps we weren’t the right home for her. I felt discouraged. Never had I felt such rejection and disassociation from a dog. I love dogs…why couldn’t she feel this? I remember chatting with my neighbour about how discouraged I was feeling when my neighbour told me to slowly turn around. My heart leapt as I saw her little, curious face peering out of the glass storm door that I had left open. Neither of us moving, we watched surreptitiously to see what would happen next. Ruby was fearful, yet curious. After poking her head outside, she went back inside for a while, I assume to her crate where she felt safer. Within the hour, she started to come out a little further and a little longer each time until finally she came right over to me, where I was still standing watching with my neighbour. We were both excited and respectful of the strength and courage this dog had to accomplish such a feat. For her, this was a huge barrier to cross.

The barriers have continued to break down. Getting a collar and a leash on her was impossible for at least three weeks but gradually she began to associate that when she had a collar and leash on, it translated into having fun. It was obvious that she was terrified ascending and descending staircases, riding in a vehicle, meeting new people, garbage trucks, and unfamiliar dogs. Her fears were very real and very apparent.

From the very start though, we cared about Ruby and were committed to making her life better and preparing her for her forever home. It was our promise to her and to the Golden Rescue organization. In return, she has made our lives better. Like an onion, Ruby’s layers of distrust have peeled away to reveal her high degree of intelligence, trust, sense of humour, love for playing, love for running freely with her trusted other Golden Rescue dog friends. She is learning so much from her friends and loves to stay over at her Golden Rescue friends’ homes when necessary. She has helped us to laugh in the sad moments while being a wonderful companion as I recovered from surgery.

It has been a wonderful journey thus far. We know that Rubywill continue to become more confident and break through more barriers that hold her back through fear. We love her so much and we know that we are right for her as well. In December, we had the honour of adopting this sweet, funny little friend! We continue to enjoy each day with her and with our Golden Rescue friends!