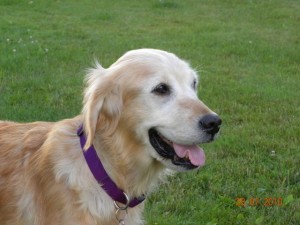 This is Molly…one year later. Molly arrived at our home in July 2010 after being rescued along with 16 other dogs from a barn in Durham. Not sure of her age, nor having a name, we called her Molly and gave her a birthday of February 14th. Molly was mal-nourished with matted, patchy fur (her tail was almost naked), and her paws were caked with feces that took over an hour to soak enough to get them clean. We didn’t know how to look after her but she and our own Golden, Murphy, helped us learn one day at a time. Molly’s strong spirit had allowed her to survive her horrific past life so we wanted to ensure her new life was nothing but loving and gentle. Molly lived with us for seven months. She was spayed and had to have five teeth surgically removed that were cracked. The vet said that the cracked teeth must have caused her such pain, but you would never have known it as one of her favourite treats was ice cubes! Molly spent months on medication trying to get rid of parasites. Pat adopted Molly on February 12th just in time for Molly’s birthday. The initial weeks with Pat did not go well for Pat nor Molly as Molly had a re-occurrence of her parasites. Once new meds were introduced, Molly’s new life with Pat began. Pat took Molly on short trips to neighbours for dinner to get her used to meeting other people and dogs as Molly was very skittish. Pat helped Molly get comfortable at the local dog park in puppy (baby) steps. Pat says that Molly is getting quite adventurous now and will go into the bushes to explore until Pat calls her back. She enjoys the attention and pats she gets at the dog park and will go from person to person and leans in so that everyone gets the chance to pat her. Pat says that her goals for this year are to teach Molly to play with toys and balls and to be alone…so that she can take a vacation. Pat says that Molly’s coat is now long and beautiful. Whenever Pat is out, Molly watches at the window for her return. Molly has found love! This is what we do at Golden Rescue ~ give Goldens like Molly a second chance at life.