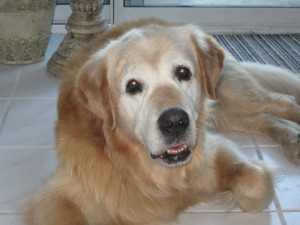 Myles came to us on August 28, 2010 and we wanted to say that he has been one of the most beautiful gifts we have ever received.

He was found as a stray wandering and not a lot was known about him. He was under weight, shy and timid and is also deaf as well. The saddest part was that he was at least 10 years old according to the vet that looked after him and had troubles with his knees and hips and was left to wander on his own looking for food and shelter.

Myles was very shy at first when he came to live with us and seemed a little leery with all the kisses, cuddles and hugs that he was getting every single day. It was almost like he maybe had never had that much attention from anyone before. I am proud to report that he now looks forward to them and follows us all over the house until he gets his quota of attention and kisses. He is quite the character and has come out of his shell and as my Mom says has become quite “cheeky” with us and his new brother Indy, a 3 year old golden.

The bond between Myles and Indy was instant and they are now inseparable, they sleep together, cuddle together, walk together and play together every day. Myles loves to lie on the ground and nip at Indy’s paws as he walks by to get Indy to wrestle with him. Because Myles is a bit shaky on his feet, Myles has taken to lying on his back to wrestle with Indy, rather than standing. This game goes on all day and is quite comical to watch.

Myles loves his walks and when we show him his leash he is the first at the door ready to go out and explore. He is quite the cat hunter and loves to sniff under all the bushes and crawl under cars looking for cats. We laugh because there have been many times that he is totally under a bush and we are left standing on the other side holding his leash while he searches out a cat.

We are so happy with Myles and just can not get enough of him. He just has to look at us with those big golden eyes and beautiful golden face and we melt and cave in to him. I think he is catching on to that now as his way of getting extra treats and attention. He just looks at us with a great big golden smile, never stops wagging that tail and we are putty in his paws – he knows it too.

We are looking forward to as many more years as we have with Myles and will cherish each and every day we have with him. He has brought so much joy and happiness to our lives, and I know that he too feels the same way about what we have brought to his. I am convinced he is an Angel is disguise.

Thank you so much Golden Retriever Rescue for not just making a difference in a dogs life, but an owners life too.