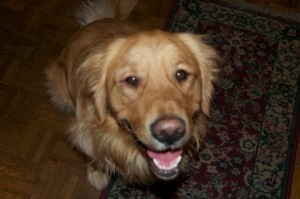 I got Sam when he was 16 months. Within a few minutes of his arriving at my home, he searched the apartment and brought me a pack of Kleenex. I didn’t quite get what that was for at first, but it didn’t take long before I realized that he never does anything for no reason. For example, if he has to go to the bathroom, he will bring me a plastic bag. As Sam tends to be a slightly more ‘lippy’ dog than average he can drool enough to put out a minor fire. So it was very thoughtful of him to show me where the Kleenex was straight away. Sam wouldn’t get into a car without a lot of coaxing until basically yesterday. I don’t think that is a coincidence either. I estimate that he turned three at the start of April so I suppose that means I have now had him longer than he has lived anywhere else. Now he gets in a car without a single word of encouragement because at this stage, he knows that he is coming back to our home.