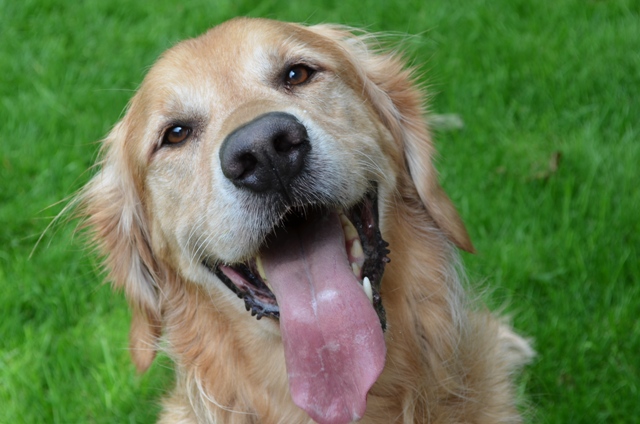 Bronson came to us in August 2010 as a foster from a “breeding facility”. He had not been socialized, had separation anxiety issues, was able to escape out of any crate, jump any barrier (or bull through it if he had to) and was extremely fearful of loud noises. He had no idea what a leash was and cowered at the very sight of it. Getting him in an out of a car was next to impossible, he needed to be double leashed to be sure he wouldn’t bolt out of fear. It took some time and we went through a couple of TV converters, cordless telephones and some damaged door frames but soon his separation anxiety began to subside as he became a member of our pack and gained security from our other confident dogs. Eventually Bronson understood that a ride in the van meant something fun was going to happen and he quickly joined in with the other dogs running down the driveway and jumping in the van with the command words “in the van”. He is my husbands most loyal fan and is never far from his side, the two of them are often found sprawled out on the couch for a snooze together. We have had quite a few Goldens come through our door over the years but Bronson most definitely makes us laugh the most, once he settled in and began to trust a real goofball emerged. The way he molded himself around all the members of this family, canine and human we truly believe he chose us.