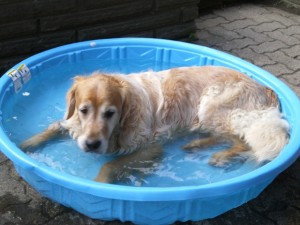 Liam came into our lives just over a year ago. He is now seven and in comparison to some other GR Goldens, has had a pretty good life. He was raised by an obviously loving family who were unable to keep him due to an allergy and was taken into an equally loving foster family’s home. We lost our other Golden, Lucas, at the ripe old age of 14 and didn’t think we could love another one like we did him. But a friend, who had already adopted two beautiful dogs from Golden Rescue, encouraged us to at least try. Thinking that it might take up to a year to find a match, we went ahead and submitted an application. Low and behold, we received the call three days later. We traveled from Guelph to Barry’s Bay, fell in love, and Liam has been a very important part of our family ever since. He loves the water (as you can see), chasing balls (retrieving…not so much), riding in the car, and staying close to us. Thank you Golden Rescue. It was not so much Liam that was given a second chance as it was us.