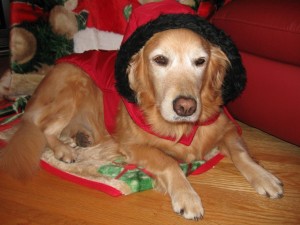 I saw Jenny on the Golden Rescue website in January 2011. I had been actively looking for a new pup for three months since the passing of my beloved Ryley, Golden Rescue #1387, in October 2010. The moment I saw Jenny’s picture on the website there was something in me that said, “I think she is the one!” She was standing so tall and proud and my heart melted. Here was this tiny little girl looking so brave and oh…so sweet! Jenny was four years old but obviously had led a very sheltered life. Within a week, Jenny came to meet me and from the moment she jumped out of her foster parent’s SUV, I knew she was home to stay! Apparently Jenny was a stray from the United States and somehow ended up in Canada and thankfully she eventually came into the care of Golden Rescue. To look at this tiny little girl, I could never imagine her being on her own. She is so timid but obviously also a survivor. Jenny is the sweetest, most gentle pup that I have ever known. She has become the darling of the neighbourhood and people are constantly stopping me on my walks and saying how pretty she is. Everyone asks me where I adopted her from and she has become a great ambassador for Golden Rescue. When Jenny had been here a few days, I noticed that she never went near the front window to look out. I tried showing her how to look out but she was not interested. One day as I was driving up the driveway I noticed this little blonde head looking out the window onto the street. From that day forward she has become a member of Neighbourhood Watch. So many things were new to this precious pup. We just celebrated our first Christmas together and having her as part of the family made it my best holiday season ever. On January 30th, we celebrated our one year anniversary with our little sweetheart. Jenny is loved so very much and the joy and happiness that our little girl has brought us is beyond words. I am looking forward to many more years of loving and spoiling this beautiful Golden girl. My sincere thanks to Golden Rescue for finding Jenny her ‘fur’ever home and for all that you do for Goldens!