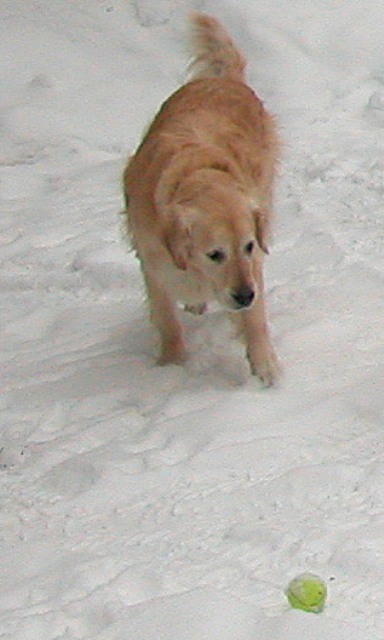 Our two long-time Golden Retrievers died within the past year and we thought that our days of dog ownership were over. The love we had for them was so special that we thought it would be impossible to have the same feelings for another dog. We were wrong. When we heard about a five-year-old Golden in foster care that was in need of a permanent home, we began to reconsider. Our hesitation was mainly because we are seniors and we know that the time commitment and energy required to give a dog a good life is considerable. However, we made the commitment and adopted Trigger and have not had a moment’s regret. He is beautiful, loving, obedient, sweet, and gentle. When he first came to us he was fairly quiet but he has already developed into a good watch-dog and does not hesitate to let squirrels, cats, rabbits, etc. know that this is his home and that he’s in charge! For the first two weeks or so, Trigger did not want to get into the car. Perhaps he was thinking that another move might occur. Now he feels more secure and he loves going with us. His favourite activity of the day is walk time – sometimes around the neighbourhood but more often, it’s into the car and off for a trail walk. The exercise from walking and the companionship and devotion we receive from our four-legged friend is priceless – and probably is adding years to our lives. In the short time that Trigger has been with us, he has become a very special part of our family.