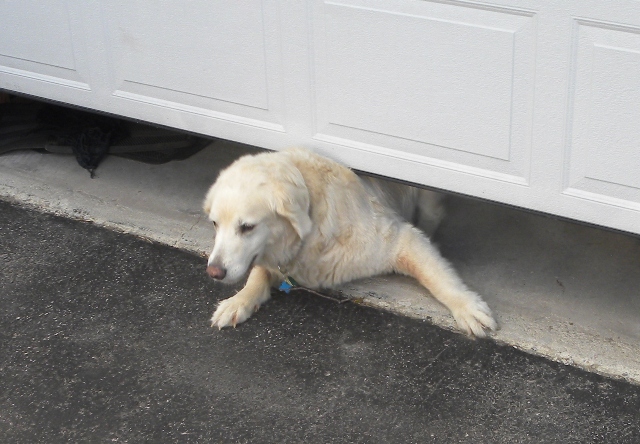 Bentley arrived as a foster in our home in December of 2011. After first lunging at his canine brother, Murphy, Bentley adjusted quickly and became the kind of Golden that would feel at home anywhere. I think he knew at that point that he had found his forever family (but he didn’t tell us just yet!). Bentley loves to prance around the back yard letting all the birds and geese know this is his property! Bentley has severe allergies (to beef, chicken, turkey, and carrots)…not to mention almost everything outside the door, but after spending seven months on medication and daily ear cleanings, he has the ‘all clear’. Bentley’s gentle nature, early morning ‘woof, woof’ songs, and ‘Tigger bounce’ for his breakfast quickly stole our hearts. Bentley is quite the escape artist and wants to be everywhere we are. We were out front on the driveway doing some work and he didn’t like being limited to the garage, so he took advantage of the two feet left at the bottom of the garage door to let us know that he planned to join us. Bentley had his 8th birthday in June and has now celebrated his forever family with us!