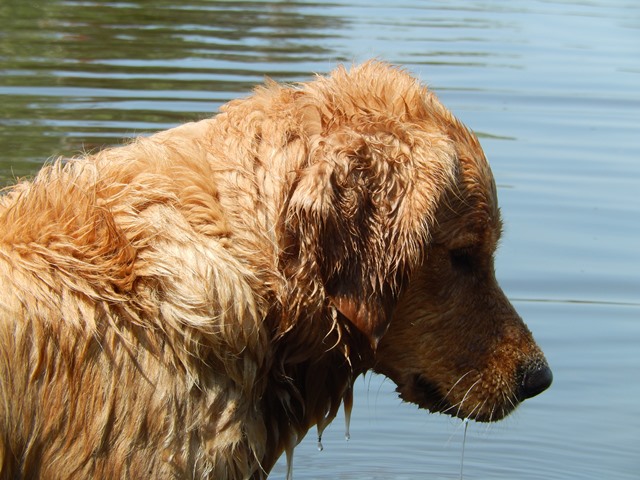 Oliver had a rough start to his life. He came to Golden rescue at 1.5 years old with a number of issues. His main issue appeared, on the surface, to be aggression. He was fostered twice and adopted three times unsuccessfully until us. We are his forever family and we have provided all the love and patience Oliver so badly needed. It was love at first sight for us and we took Oliver home the very next day. It was suggested Oliver be muzzled for every vet visit. Instead we took Olly on a number of short visits to the vet where nothing was done other than weighing him. They made the visits fun and the staff played along. After two weeks of these short visits, Oliver seemed ready for a real visit and he was a superstar. In fact, he now loves going to the vet and gets excited whenever he’s told he’s going…a small miracle. After consulting a behaviourist, we discovered Oliver’s aggression was actually fear aggression against women and children. Who knew what happened to the poor boy early in life but this issue had to be dealt with, with understanding, patience, and love, which our family had plenty of. Today, women and children can pet Oliver as long as he is sitting. His issues have slowly been melting away and he is 90% there. Pretty good from where he started. Besides, who of us is 100%…none of us, we suspect.