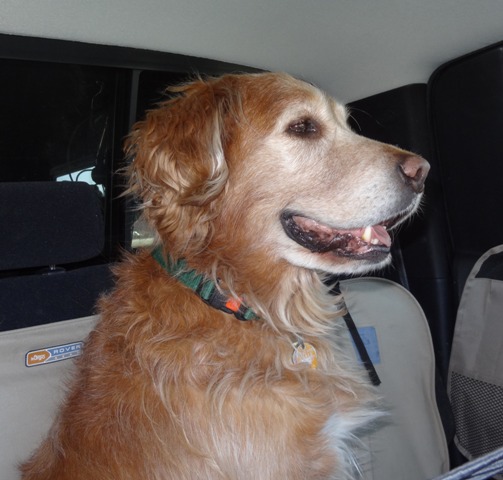 Having recently lost our beloved Border Collie/Golden mix (our first rescue dog), we were looking for another Golden to love. We had thoroughly enjoyed the company of two Golden Retrievers previously ~ one lived until he was 15 and the other was a rescue who made it to the age of 12. We discovered eight-year-old Isaac on the Golden Rescue website and he sounded wonderful. His foster family described him as a ‘perfect’ boy with no bad habits and he has proved to be a delightful addition to our family. We figure he has been in at least five homes in the past 11 months, but he fit into our lives within hours. I guess he was used to adapting! True to his breed, he loves following us around the house, keeping an eye on us, lying at our feet or under the table when we are eating, and waiting patiently to play or go for a walk. When we wake up in the morning, he is there with his tail thumping on the floor with his ‘ain’t life great’ attitude…ready for another day. And while he loves to be with us, he is also happy to amuse himself with his toys, especially squeaky ones! His goofy Golden nature has already brought us many smiles and out-loud laughs. He is wonderfully gentle with our granddaughters (ages 2 and 9) which, because of his size, makes us particularly happy. We had not had success teaching our smaller, younger dog (another rescue) how to fetch a ball, but Isaac showed him within days. Isaac is also very tolerant of the younger dog’s occasional bouts of enthusiastic playing. If ever there was a Golden that deserved a continued shot at life, Isaac must be the dog. We hope that we will be able to share our home and love with him for a good number of years. We have no doubt about Isaac’s love for us or life, which he shares so willingly and openly.