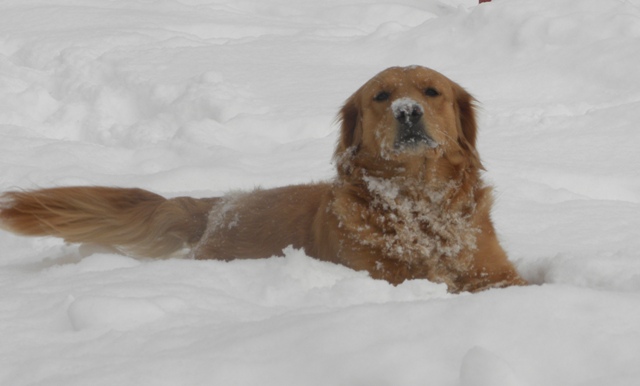 Jenny #1828 came as a foster into our home as we were fostering another puppy mill girl. Although Jenny was a tiny Golden and slightly underweight at 32 pounds, fosters Jenny and Cher #1879 wrestled and played constantly with our own two male Goldens. Jenny and Cher are opposite in nature. Jenny appears happy, secure and outgoing and makes it clear who is the “boss”! Cher is quieter and more withdrawn and nervous around people. Both of these girls have taught us so much. Cher was adopted by a wonderful family who are dedicated to her and has become the official “greeter” at their business. We adopted Jenny who had appeared to be a spunky little girl but it has taken her almost a year with us to finally seek out belly rubs … the true sign of a trusting Golden. Thank you Golden Rescue for all your support and encouragement and allowing us the joy of sharing our lives with Jenny.