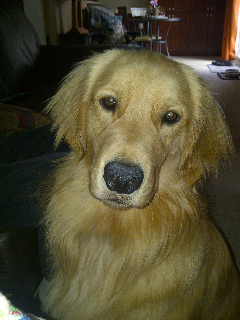 Lochlann is doing amazing and has made himself right at home. We are doing well with the training and even have him off leash now. He has met several other dogs with no problems.

After having lost our two Goldens within months of each other, we realized that our house was not a home without a dog in it. Since we have had three Goldens (two of which were adopted from Golden Retriever Rescue) we decided to adopt again.

Lochlann was posted on the website on September 11th, which was the birthday of one of our previous Goldens and we figured this was a sign. When we made arrangements with the fosters to meet Lochlann, it was on September 22nd; believe it or not, the birthday of one of our other Goldens – definitely a sign. No big surprise, Lochlann came home with us.

Lochlann is an absolute pleasure and has fit right in. He loves his walks and after having three Goldens Retrievers, this is our first who truly retrieves – he cannot get enough of fetch.

He is also the most cuddly dog we have ever seen. Second to playing fetch, he loves getting on the couch and putting his head on your lap and is happy to sit there for hours.

We would like to thank Golden Rescue for once again giving us an amazing dog. We believe Lochlann is as happy in his forever home as we are of having him.