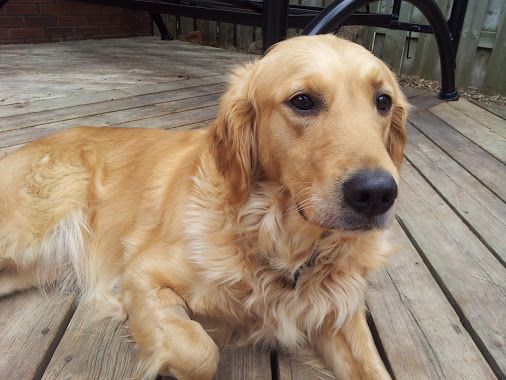 Over the past few years, I have fostered several Goldens, but none have touched my heart the way Sweetie has. Her past history, like many that come into rescue, is vague. Apparently, she was ‘found’ and then sold on Kijiji to a loving family. They took her into their home or rather they tried to. Over several months, they could not convince this terrified girl to come in from her hiding place in the garage. Recognizing that they could not manage her fears, the family contacted Golden Rescue and surrendered her for further care. Along the way, she was named Sweetheart or Sweetie, a reflection of her sweet personality and desperate need for love and safety.

Sweetie arrived in early January. It took four people and about an hour to convince her that it was safe to come into the house. After Sweetie was introduced to my pack, she spent the remainder of the day curled up in a corner with her face to the wall. For the first few weeks, any noise or sudden movement would cause her to collapse onto the floor in a terrified heap. She wore a harness to aid in getting her up whenever she froze in fear. She was on leash for every trip into the back yard for several weeks to keep her calm. As the weeks passed, she began to relax in the house and became comfortable in the presence of other dogs and cats.

Some of Sweetie’s first trips out of the house were for medical care. In addition to the vet care routinely provided by GR, Sweetie was diagnosed with a heart murmur that required additional investigation. Thankfully, the tests indicated that the murmur was mild and would not affect the quality or length of her life. Sweetie is now spayed and micro-chipped, with a clean bill of health.

Sweetie continues to make slow progress. For example, initially, she would not take a treat. Then, she would take a treat but only with other pups around and she would run off with it. Now, she is willing to take a treat from me and eat it with me in sight, even if the other pups are not in the room. Interestingly, in the past few weeks, she has become a bit destructive when left alone. Increased visits from the pet sitter have helped with this and it seems to be related to separation anxiety. Walking on leash remains a significant challenge for her as external stimuli continues to overwhelm her, leading her to freeze in place or try to hide. She has begun to play with the other dogs in the home and although each session only lasts a few seconds, I am encouraged that she is now interacting with the other dogs rather than just watching them.

Sweetie’s recovery has been and will continue to be aided by the other Goldens in the home. It is beautiful to see the love and healing that occurs when dogs learn from one another. She is learning not to be afraid of each noise and new experience…that the yard is a place to chase and play…that toys are fun…and that coming when she’s called results in treats and cuddles. Sweetie’s progress is slow but she continues to take baby steps towards a new life of peace and happiness.