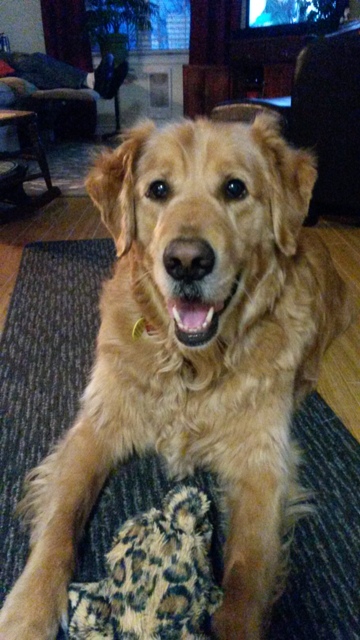 I adopted Sargie #722 from Golden Rescue when he was nine and was lucky to have almost seven great years with my little old man. He was a gentle soul and my best bud and I’ll always miss him. We lost our Sarge to a stroke last May. It took me almost a year, but when I was ready, Golden Rescue allowed me to adopt Ozzy. This is our Ozzy, aka Ozzy-bear, aka Ozzy McFozzy. Ozzy loves people and his joy knows no bounds when he meets a friend, new or old. He’s made fur friends in the neighbourhood (he already has a girlfriend) and he’s even getting along with the neighbour’s cat! Great considering he was afraid of the cat at first, lol. Ozzy can be quite a character at times, he loves to play “chase me” and to play tug with his stuffies. We call him our “ton of fun” (he’s a big boy). He has the sweetest big button eyes, a great smile and he tap dances with his front paws when he’s excited. He’s a daddy’s boy when it comes to hanging out or rough housing but he’s a momma’s boy when it comes to cuddle time, lol.

Ozzy’s a joy, but then what else would he be, he’s a Golden 🙂

Thank you to Golden Rescue, and Ozzy’s foster parents for allowing me the opportunity to be Ozzy’s mom.