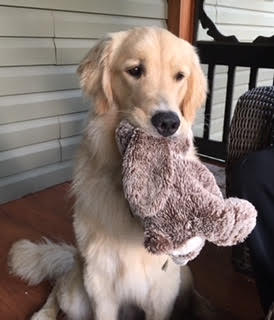 Charlie was the boy no one wanted. He was bought and sold, surrendered, and adopted twice before he found his forever family. He spent his first six months of life in a crate in a university dorm, where he was never given the chance to learn the ropes so, he came to Golden Rescue with little or no training. He was very anxious when he first arrived but slowly he started to realize he was safe. Once he felt comfortable, he started to exhibit normal raucous puppy behaviour, which made our family laugh…but his lack of training was difficult for everyone. We fell instantly in love with this little character and we went to work right away on his education with the help of a trainer. It took a while and Charlie certainly stretched our patience at times but he started to learn the rules and now he is mostly a really good boy. Hey, no one expects perfection, right? Our loveable boy has come such a long way that we think he may make a good therapy dog in the future. Speaking of the future, rumour has it that Charlie might be getting a brother or sister soon. How cool is that, eh Charlie?