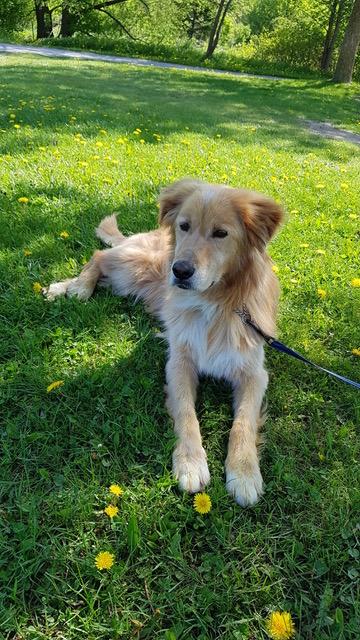 A Tail of Two Cities – Istanbul to Toronto

Two years ago we lost our beautiful 16-year-old Golden Retriever “Bailey” who had died on Christmas morning.  After many months of contemplating getting another dog we reached out to Golden Rescue and they added us to their adoption list after we completed their application.  In May of this year, we were contacted by Golden Rescue and were honoured with a 4-year-old Golden named “Puddles”.

On May 10, 2018, we made our way to Pearson International Airport and waited with anticipation for “Puddles” to clear Canadian Customs.  He had traveled from Istanbul, Turkey and had to endure 24 hours in a crate before being let out to greet us.  At first glance, we were very excited and he was everything we had hoped and wished for.

My daughter was very fond of him right out of the crate, no pun intended…and as we made our way to a grassy area so Puddles could relieve himself my 7-year-old daughter began to cry emphatically!  Both my wife and I were puzzled as to what had happened and our first thought was that Puddles had possibly done something wrong but that was not the case, not even close.  The tears and emotions she expressed were because she was welcoming Puddles into her life as a friend/brother to play with and she was overwhelmed with joy.

After a week or two of him settling in he has shown us that he has a very gentle side.  Folks in the neighbourhood often stop us on the street and want to pet him which he absolutely enjoys every minute of the attention.  He especially likes meeting new dogs on the walk and is always ready to play.  The only unusual thing about him is that he ferociously barks whenever he hears and sees a commercial jetliner 35,000 feet in the sky.  And despite a few indoor incidents on our carpet he has been extremely adorable.  But just to be on the safe side, we changed his name from Puddles to Riley.

We are very happy with our new family member and he shows us his appreciation of being rescued every time he has breakfast and dinner.  If he could only speak, but to me, the expression in his eyes says it all.

Many people often praise us for rescuing Riley especially when they learn of his incredible journey which began in a foreign country and where his past may not have been under ideal conditions.  Little do they know that it was Riley that rescued us!

Thank you Golden Rescue and to all of the amazing people who volunteer their precious time for these beautiful animals.

The Next Chapter……Riley aka Puddles came from the streets of Istanbul and from the moment he stepped out of his crate at the airport it has been love at first sight for us and for Riley.  After a few indoor ‘accidents’ we decided to rename him just to be safe.  During every meal, he had this look in his eyes that seems to say ‘thank you so much for saving me’.  If Riley only knew he rescued us after we lost our beloved 16-year-old Golden Bailey, just months before.  Folks in the neighbourhood love meeting this new Canadian and Riley loves the attention.  His only quirk is he barks ferociously when he sees and hears a jetliner overhead.  We wonder if he is worried he may have to go back.  Don’t worry Riley ~ you’re here to stay…forever!