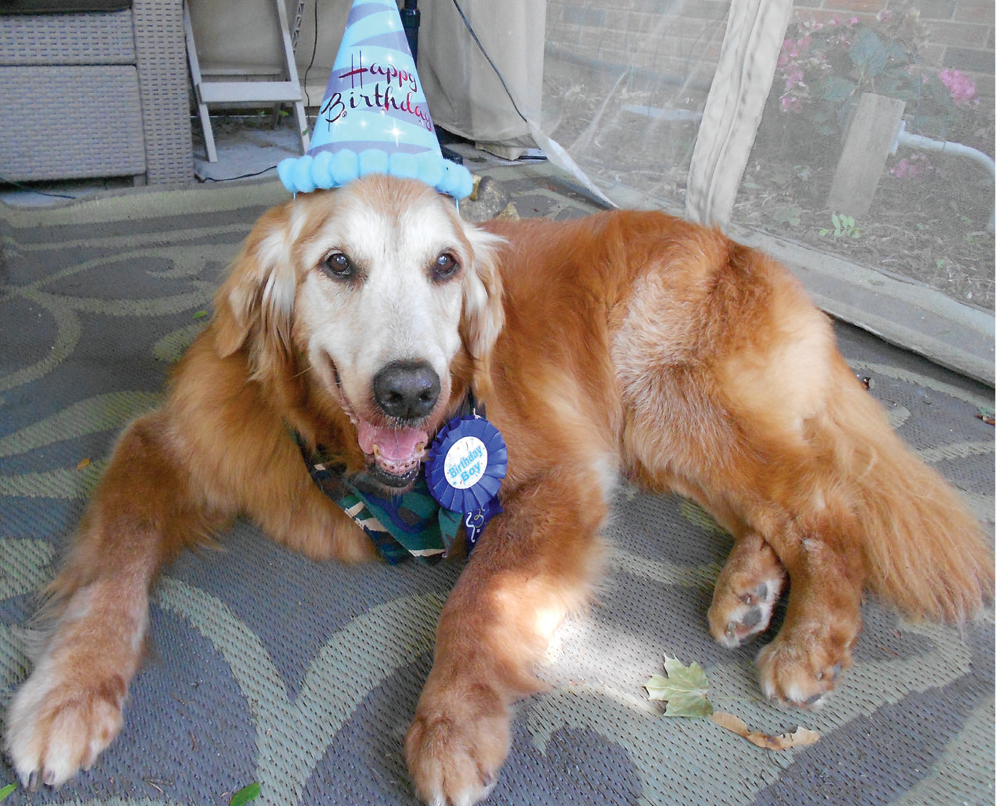 George #682 has been given a second chance. Nine years ago he and Murphy #683 were adopted to their forever home by LaSalle resident Kelly Blais. They were a bonded pair, so the two Golden Retrievers were adopted together through a non-profit organization called Golden Rescue. “I came to know about GR when I adopted the pair,” said Blais.

“We lost Murphy a couple of months ago. She was 15. It has been a difficult transition for George, but he is starting to bounce back.” Blais says the GR has been a huge support to us over the years and when Murphy passed away the situation was no different. “George turned 17 on July 5th so we are very excited to celebrate this incredible milestone with him,” said Blais. Blais says a few weeks ago, GR approached her to see if they could use George in their campaign that focuses on promoting adoption of senior Goldens.

“Of course we said yes! George’s first poster came out recently (#seniorsaturdays). His second poster will come out this coming Sat and the next one on the following Saturday, the eve of his special birthday,” said Blais. “It’s a great campaign and we are very touched to be part of raising awareness and being able to give something back to an organization that has given us so much.” “Golden Rescue is one of the largest single breed rescue groups in Canada,” said Viive Tam, the chair with the GR group. “We do have volunteers all over Ontario and Quebec and are always looking for more.”

They work hard to ensure that every Golden who enters their program is placed with a safe and loving forever family. So why on earth would Goldens need to be rescued? Tamm says this is the most common question that they are asked. “Many people are surprised that such a beautiful, loving and extremely popular breed would need rescuing,” said Tamm. “It’s understandable for breeds like Greyhounds and Rottweilers to need rescuing, but certainly not the goofy Golden.

She says there are many reasons why people give up their Goldens, “It’s hard to believe but, we have found tired, hungry, and dirty Goldens who have been abandoned, neglected or abused. Some come from broken homes. Others have to be given up due to allergies, an unexpected move or illness. Some reasons are practical…some are sad.” Since 1990, Tam says that Golden Rescue has found homes for almost 2,200 abandoned, unwanted or displaced Golden Retrievers.

According to Tam their mission is two pronged. They area a non-profit organization managed by a dedicated volunteer board of directors, who are all business people passionate about Goldens. These amazing volunteers along with private donations make it all happen.

In addition to rescuing Goldens, they pursue every opportunity to educate the public about responsible pet ownership, as well as help other rescue groups.

All their Goldens go to experienced foster homes where they assess their behaviour and provide all the veterinary care, treatment, rehabilitation, love, and attention they need prior to matching them with their forever family.

“Goldens are such a wonderful breed, it’s baffling to me that we even need this type of group,” said Blais. “I kind of have a soft spot for older animals, the ones who need rescuing. You give these guys a home and they love you unconditionally. I believe that they know they are being given a second chance. It’s amazing how quickly the bond grows.”