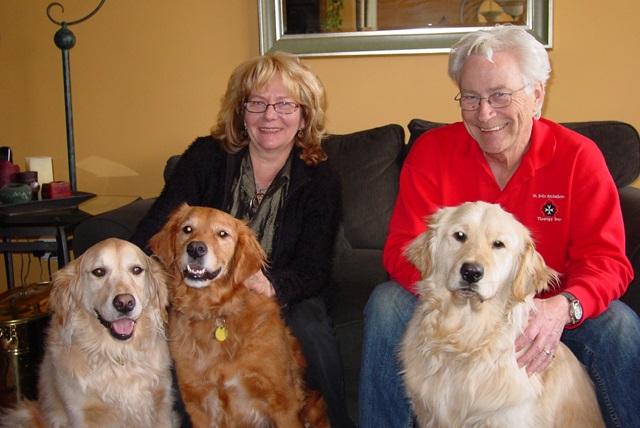 Cyndi and Ross connected with GR in 2008 when they adopted Hayley to keep their Golden Drambuie company. These two angels are tireless supporters of GR and they both help GR in numerous ways, including manning booths (Sportsman’s Show to Pickering Markets).

They have fostered many Goldens since 2010 and Cyndi spend some time as a valuable member of the intake team…one the most difficult roles in the organization. Ross has been known to jump in the car on a moment’s notice to pick up a Golden in need. They both do home visits and behaviour evaluations.

Cyndi is a leadership coach and her job finds her on the road a great deal. Ross is a past evaluator for St. John`s Ambulance therapy dogs and currently is an evaluator for Therapeutic Paws of Canada. Somewhere between their busy life of work and helping GR, they find time to play golf and curl.

Thank you Cyndi and Ross for all your efforts on GR’s behalf!