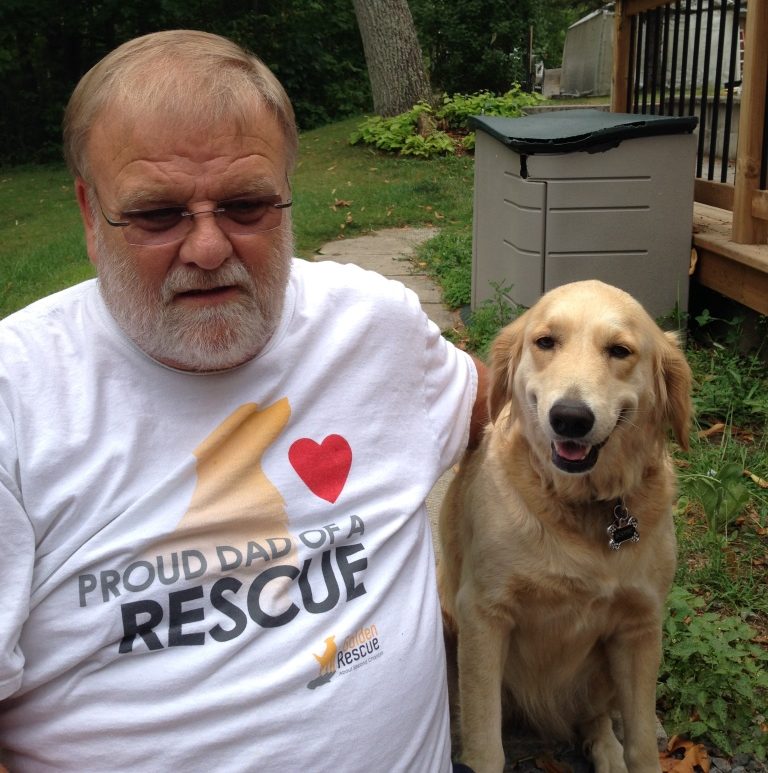 Kevin, a great GR advocate and supporter, lost his first Golden to cancer in 2013. Friends told him about GR and he submitted an adoption application, which resulted in Kevin adopting Gubs #1849. Unfortunately, two years later, Gubs crossed the Rainbow Bridge leaving Kevin devastated. Undaunted, Kevin got back on the horse and adopted Istanbul darling Sophie Tucker #2263.

Kevin was one of original team that drove to JFK to meet and bring home the Goldens from our inaugural Istanbul flight. That was the flight Sophie was on. Sophie became Kevin’s new shadow and you never see Kevin without Sophie. Ever since then, Kevin and Sophie have greeted every Istanbul flight and over 100 Goldens. Sophie, our mascot/greeter is so cute at the airport as she orients the new arrivals speaking to them in Turkish woof-woof to make them feel comfortable…and a fine job she does. Apart from his ambassadorship duties at the airport, Kevin is a monthly donor, does transports, home visits, and behavioural evaluations, and sells wishbone lottery tickets.

Kevin spent his 65th birthday at the airport with his GR family and he says he wouldn’t have had it any other way. Thank you ‘Ambassador’ McLaughlin…you’re the best!