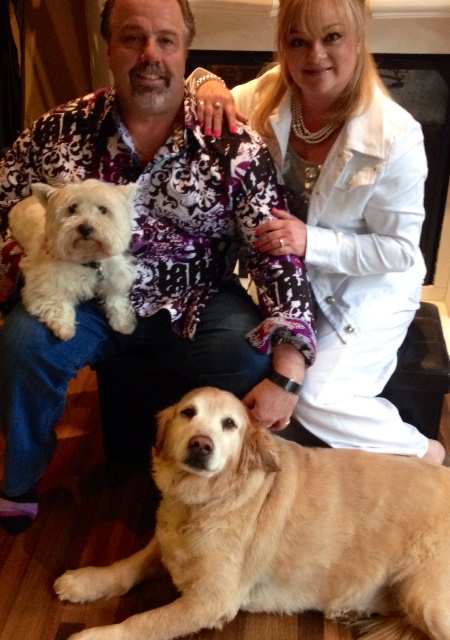 Lori was introduced to Goldens through her brother. He had two sweet Golden pups and Lori watched them grow up and fell in love with the breed. On a walk one day with a friend, Lori expressed a desire to find a Golden. Coincidently her friend was fostering a Golden and one thing led to another and before she knew it, Lori had adopted Sam, an overweight Golden with a broken leg that hadn’t healed properly…but to Lori, he was perfect. When Sam first met Lori, he came bounding out of the car, ran to the open door of her house, and literally fell into Lori’s arms, and licked her face.

Lori and her husband Kevin are like the Brady bunch and have a wonderful blended family of five children, a Westie named Ruby and, of course, Sam. As the children grew up and started to leave the nest, Lori found herself with time on her hands and got the urge to help Goldens in need. She found GR’s website, saw they were having a picnic, and asked if she and Sam could attend. The rest is history!

Lori and her family have fostered eight Goldens so far. They’ve helped with fundraising and literally anything else they have be asked to do. Lori’s ‘can-do’ attitude is such a breath of fresh air. She thinks her volunteer efforts are selfish as she believes the dogs give her much more than she gives them. You’re the best, Lori!!!