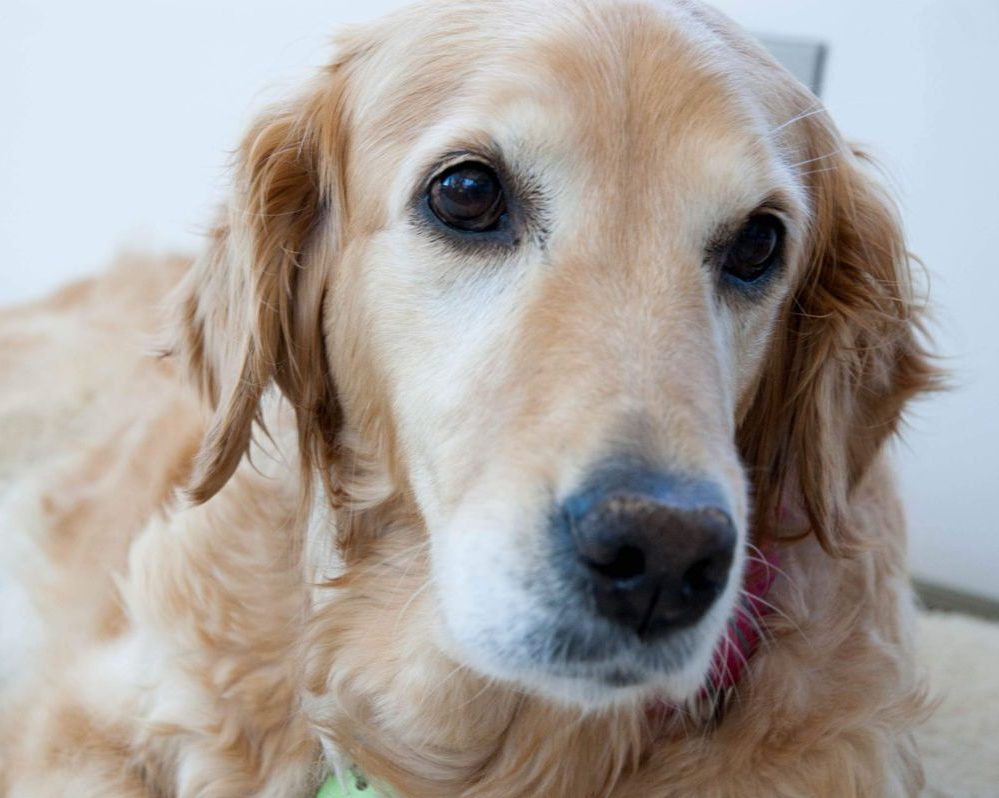 This little girl came to us from a puppy mill and the best we can determine, she had no human interaction, love or kindness in her first six years of life except to be given food and water. She was a puppy-making machine, kept in a cage, and the only canine interaction she had was when a male came into her pen for breeding.

When Golden Rescue took her, she had almost shut down.
She was terrified, insecure and catatonic.  She had no socialization skills with humans or canine; therefore, she was literally afraid of her own shadow, people, dogs, loud noises, sudden movements, cars, the leash…everything.  In her first three weeks of being rescued, she was spayed, had 10 teeth removed, and was treated for serious ear infections in both ears. 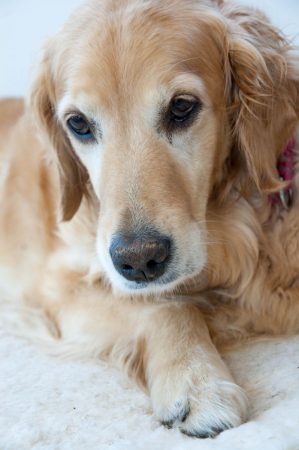 This sweet, gentle soul was lucky enough to be adopted by two angels who poured love, attention, patience, kindness, and understanding into her heart…slowly giving her much-needed confidence to fight her fears. After nine months, Cobi started to respond to this affection and would ask to go for short walks. At times she would even follow her family around, gingerly leaving her bed that had become her sanctuary. Successes are slow but her family has been working with her tirelessly, sitting on the floor with Cobi for hours assuring her that she was safe. They even took Cobi to work with them to expose her to a world she had no idea existed.

There is no doubt that the light is coming back into her previously dead eyes and her tail, previously invisible, can now be seen on occasion and it even sometimes wags. These improvements may seem small but to Cobi they are massive. Her new family is so proud of their amazing girl and they are hopelessly in love. We know Cobi is too as she now follows her new mom everywhere. 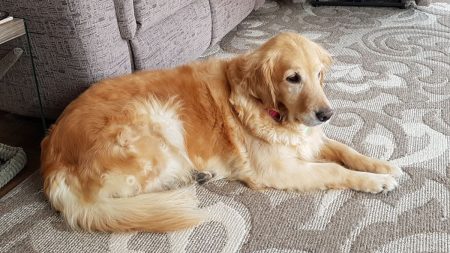 Just the other day, her family saw her with a new expression on her face that they hadn’t seen before ~ they have chosen to believe it was a smile.

Donations make it possible for Golden Rescue to help dogs like Cobi receive a second chance.

You can make a tremendous difference in a Golden’s life through your donation and especially by becoming a monthly donor.
Please consider that option when you click on the donation form. Thank you.