From Calamity to Camelot…

If a picture’s worth a thousand words, this one is priceless.
Home | What’s New | From Calamity to Camelot… 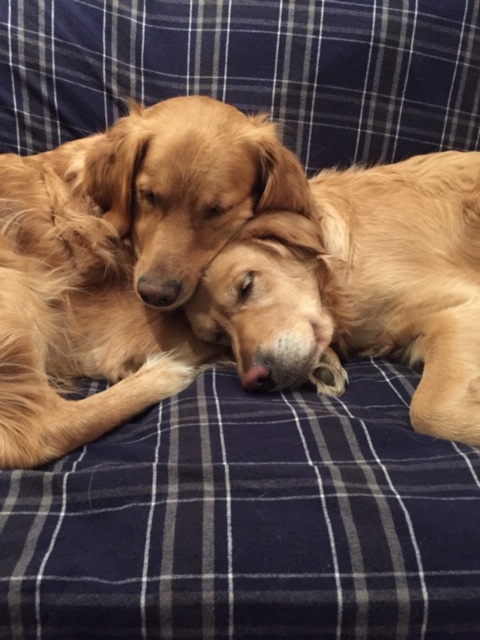 From Calamity to Camelot…

If a picture’s worth a thousand words, this one is priceless. In what parallel universe could two suffering strangers surpass all expectations and not only survive but thrive as a pair of bonded and cuddling couch buddies?

Merlin, named for the sage in Arthurian legend, was struck by two vehicles on the streets of Turkey and staved off foes in the nearby forest with his ferocious bark and ability to play dead. When his rescuers found him, he was blind in his right eye and partially paralyzed with only two working left legs. Once shorn of his matted coat, leaving him with a lion’s mane and a bony body more lamb than dog, he was flown to freedom in Canada on March 5, 2016.

Welcoming Merlin warmly into her home was Kelly and her devoted Husky, Nina, who promptly greeted the skeletal, suffering Merlin with a kiss despite his vociferous protests, establishing herself first as his protector and ultimately as his best friend.

In rapid succession, Merlin’s blind eye was removed, his right front leg amputated, and hydrotherapy for his right rear leg started ~ all of this as he was learning his basic commands and mastering his housetraining skills. His new ‘walk’ soon had a spirited bounce to it while his extraordinary love of people, perpetual goofy grin, resilience, and bravery stole everyone’s hearts. 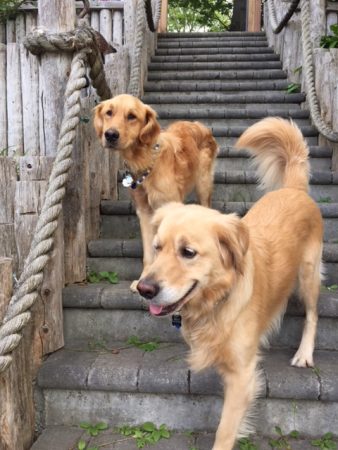 When a grief-stricken Merlin lost his beloved Nina last summer, he couldn’t know that his loneliness would soon be eased by the arrival of a fellow Golden. Enter Sir Lancelot, hardly a knight in shining armor, but a shy, half-starved fellow survivor of the Istanbul streets. As if channeling Nina, Merlin promptly nuzzled the bewildered and bedraggled Lancelot in welcome and was soon teaching him everything he knew.

Thanks to Kelly’s love and Merlin’s tutelage, Sir, as Kelly calls him, blossomed, revealing his natural sweetness and innate brightness while he gained both weight and confidence. Now his health restored, he’s constantly hugging and wrapping his fine, furry frame around his human and canine companions. He also has the endearing habit of ‘talking’ and moaning in husky tones for attention (could he be channeling Nina too?) and following Kelly and Merlin wherever they go.

Kelly describes Sir as the best ‘feel good’ boy, who gives cuddles and hugs like no other and Merlin as the fastest Golden Retriever on land, who also adores the water and his new home on the beach. “We’re living in a beach Camelot,” she exclaims, “and I have my two princes.”

As for Merlin and Sir, they share a passion for Timbits…a true Canadian pastime that they have adjusted to exceptionally well.

“There is simply not

Than here in Camelot” 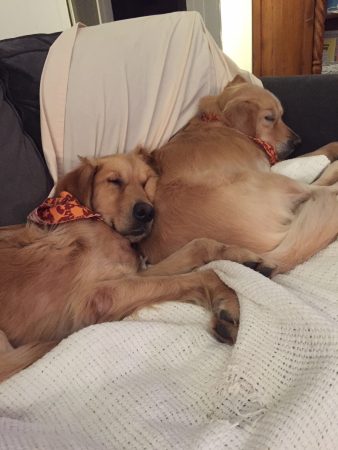 You can give Goldens like Merlin and Lancelot a second chance. Please donate!

You can make a tremendous difference in a Golden’s life through your donation and especially by becoming a monthly donor.
Please consider that option when you click on the donation form. Thank you.